You Are What You Eat: Diet and Hormone Imbalance

We’ve all heard the expression “you are what you eat.” And nowhere is that more true than in the arena of essential hormone production. Hormones affect every aspect of daily life – from energy level, to weight gain, mental functioning and even disease prevention. And the food we eat can affect the production and secretion of these crucial hormones in many ways.

Some foods are what are called “endocrine disruptors” – meaning that they can mimic real hormones in the body – which results in preventing the actual “real” hormones from being activated at all.

Other foods, such as refined sugar and other processed foods, are considered “obesogens”. This term means that they disrupt the bacterial diversity in the gut – which in turn alters metabolism, increase body fat storage, and promotes unwanted weight gain.

Other foods can cause certain hormone levels to skyrocket above normal ranges – causing one hormone to become “dominant” throwing off the proper balance of necessary hormones. Dairy and soy are believed to to cause estrogen dominance – an imbalance that can make menstrual cycles and monthly mood fluctuations much worse.

Which Foods in Your Diet Can Cause Hormone Imbalance

Many physicians will argue that sugar and sugar substitutes are the number one food culprit responsible for hormone imbalance, particularly in women.

Not only can too much refined sugar cause surges of insulin that eventually result in insulin resistance – but it is also thought to throw the stress hormone cortisol out of balance. It is speculated that the body goes into overdrive, producing too much cortisol, to combat the stress caused by the sugar-induced inflammation resulting from a poor diet.

While there are medical claims of certain health benefits of caffeine, when consumed in excess it can be a  hormone-disrupting drug that also spikes cortisol levels in the body!

Certain plant constituents derived from soy (“isoflavones”) have phytoestrogen activity – which means they mimic estrogen in the body. Since this can directly throw estrogen levels of balance, many experts speculate on soy’s relationship to breast cancer risk and thyroid imbalance.

Additionally, most soy consumed in the American diet is processed, as well as pesticide-ridden – making it highly inflammatory.

As the global demand for food began to rise in the late 20th century, industrial farming began. And along with it emerged the advent of strategically altering crops by cross-breeding the DNA of natural foods, as well as using and using chemicals, fertilizers, and pesticides to grow more food, with higher yields more rapidly.

Pesticides have long been identified in studies as among the top endocrine disruptors.

Glyphosate is the most widely used pesticide, and many adverse health outcomes have been speculated to be linked to this pesticide over the last 30 years. Glyphosate contaminated foods often include: fish & other seafood, farm-raised poultry and meat, the skins on non-organic fruits and vegetables, and GMO crops like corn, canola, soybeans, legumes, and grains.

Large fish like tuna, swordfish, and mackerel are great sources of protein and other valuable nutrients- but they are also some of the highest mercury-containing foods on the planet.

And excessive levels of toxins like mercury deplete vital nutrients, including the antioxidant glutathione – which means less effective and efficient detoxification.

In a typical western diet, foods are processed with a wide variety of preservatives to make them taste “better”, as well as to prolong their “shelf life”.

Common preservatives found in packaged foods in the U.S. include: Butylated hydroxytoluene (BHT), Bisphenol A (BPA), dichlorodiphenyltrichloroethane (DDT), and nitrites/nitrates. BHT, especially, has been demonstrated to lower testosterone and impair thyroid function.

Preservative-rich foods include: processed meat, non-organic butter, most packaged baked good, many alcoholic beverages, and even cosmetics (we inadvertently eat lip stick). Animal feed also contains high levels of these hormone disrupting preservatives –  and if we eat meat or poultry we what the animals eat!

However, realistically, the average American’s busy lifestyle makes it almost impossible to get the perfect hormone balancing foods when consuming a “Western Diet”.

Fortunately, the SottoPelle hormone replacement method can help restore your body to optimal hormone balance! If you are suffering from fatigue, sleep disruption, low sex drive, poor sexual performance, mental fog, or any other of chronic symptoms, hormone imbalance may be the cause.

The SottoPelle Bioidentical Hormone Replacement Method offers the most natural, effective, and convenient form of HRT – utilizing time-released, subdermal pellets that last up to 4 months in women, and 6 months in men, with a single insertion! 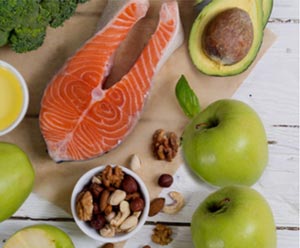