While it is well established that the female heart undergoes changes after menopause, a recent University of Guelph research study is the first to show that hidden changes to the heart actually start occurring during perimenopause in the period before menopause.

In other words, modest, often unrecognized changes to the heart start occurring much earlier in women than previously believed.  So, according to this study, the window of opportunity for utilizing hormone replacement therapy (HRT) to prevent cardiovascular disease in women starts considerably earlier than previously thought. And benefits to women’s heart health may be better accomplished by earlier introduction of hormone replacement treatment.

Women generally get heart disease approximately ten years after males. This is because the ovaries produce estrogen until menopause. Estrogen protects premenopausal women from heart disease by both contributing to the relaxation and opening of blood vessels, and by helping to maintain a healthy balance of good and bad cholesterol. But without estrogen, cholesterol may begin to accumulate on the walls of arteries.

The arteries have smooth linings and flexible walls when a person is younger, which allows blood to flow easily. As an individual ages, the artery linings get stiffer and the walls become thicker, which makes blood flow more difficult and raises blood pressure. The older a woman becomes, the less estrogen she produces, and the greater the probability that arteries may get constricted or clogged to the point of causing symptoms.

While it has long been established that younger women have a reduced risk of heart disease than males, this risk increases significantly when a woman’s estrogen levels decline throughout menopause. However, little was understood about what happens to a woman’s heart during perimenopause — the years before menopause during which hormone levels begin to decline.

But this groundbreaking research, published in the journal Acta Physiologica, discovered that female hearts experience modest alterations during perimenopause, indicating the organ is already under stress at this time.

That study went on to report that while the appearance of the heart remains same – and its function remains unchanged – the underlying mechanism of that function is altered during the hormone decline of perimenopause. So, the changes are subtle and often unseen – but nonetheless these negative changes do exist.

The research was first conducted using a mouse model that replicated real menopause in rodents. The researchers induced menopause in laboratory animals which we they gradually caused the ovaries of the mice to fail, simulating the progressive hormone decline of menopause that is seen in human females.

While the mice’s hearts continued to operate properly throughout the study, some elements of their heart muscle had altered early on – including elevated stress indicators (pro-inflammatory cytokines proteins).

The researchers next studied the mice heart’s response to estrogen therapy similar to that given to human women during perimenopause. They discovered that the mice hearts responded differently to estrogen chemicals throughout the perimenopause period, indicating that beneficial molecular alterations occurred during this crucial transition phase.

The conclusion of the study was that doctors should not just administer estrogen after menopause, since at that point they are already treating a fundamentally altered heart – a heart that has been negatively impacted by declining estrogen during perimenopause.

The bottom line is that timing is critical in protecting women’s hearts from hormone decline – so doctors may need to open the window for estrogen treatment, starting much earlier in perimenopause, and not wait until menopause to start administering HRT.

While it is well established that estrogen protects and strengthens the heart, many women and their doctors have been hesitant to utilize hormone replacement therapy due to outdated research from several decades ago. But prior to the current study, fundamental research on perimenopause hormone decline and heart disease had simply not been conducted.

Numerous women utilize menopausal hormone treatment to alleviate common menopausal symptoms such as hot flashes, fatigue, loss of libido, insomnia and more. But this research shows that earlier intervention with HRT may have significant, long-term benefits in terms of lowering the risk of heart disease, as well.

Cardiovascular disease causes 1 in 3 women’s deaths each year – that’s approximately one woman every minute – more than all cancers combined. So with heart disease being the leading cause of death for women in the United States – killing about 300,000 women annual – this research is even more important than ever. 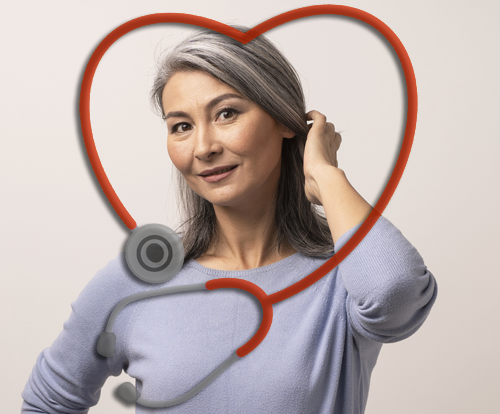